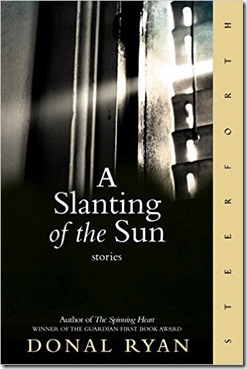 “Donal Ryan’s short stories pick up where his acclaimed novels The Spinning Heart and The Thing About December left off, dealing with dramas set in motion by loneliness and displacement and revealing stories of passion and desire where less astute observers might fail to detect the humanity that roils beneath the surface. Sometimes these dramas are found in ordinary, mundane situations; sometimes they are triggered by a fateful encounter or a tragic decision. At the heart of these stories, crucially, is how people are drawn to each other and cling to love when and where it can be found.

In a number of the these stories, emotional bonds are forged by traumatic events caused by one of the characters – between an old man and the frightened young burglar left to guard him while his brother is beaten; between another young man and the mother of a girl whose death he caused when he crashed his car; between a lonely middle-aged shopkeeper and her assistant. Disconnection and new discoveries pervade stories involving emigration (an Irish priest in war-torn Syria) or immigration (an African refugee in Ireland). Some of the stories are set in the same small town in rural Ireland as the novels, with names that will be familiar to Ryan’s readers.

In haunting prose, Donal Ryan has captured the brutal beauty of the human heart in all its failings, hopes and quiet triumphs.” – Publisher Summary

Having read, in the past, author Donal Ryan’s previous two published works of fiction (The Spinning Heart and The Thing About December), I already held a high regard for his talent as a writer. I was not prepared, however, for the impact his newest collection of short stories would have on me. After reading A Slanting of the Sun: Stories, I am quite convinced that Ryan is somewhat of a literary genius. Each story in this collection held that punch to the gut all true readers long for – that glorious rush of all the feels slipping through our veins as our bodies tingle in anticipation for the next page, and the next, and the next.

“An old man looks into the fearful eyes of a burglar left to guard him while his brother is beaten; an Irish priest in a war-torn Syrian town teaches its young men the art of hurling; the driver of a car which crashed, killing a teenage girl, forges a connection with the girl’s mother; a squad of broken friends assemble to take revenge on a rapist; a young man sets off on his morning run, reflecting on the ruins of his relationship, but all is not as it seems…” – Publicity Blurb

Some of the stories take place in or around the same familiar territory of Ryan’s previous novels; others visit faraway lands such as Syria. It was a treat to recognize names that appeared in his previous novels, as well. While the subject matter of each story varied wildly, one thing remained the same: each and every one of the pieces ripped my heart from my chest and returned it to me in a dripping, shredded mess. Each tragic story wielded power in it’s own unique way, leaving me breathless and anxious, as each one ended, to move on to the next. This, friends, is the kind of reading that I love – when it’s real and gritty and doesn’t pull any punches. And this, too, is why you do not want to miss out on reading this amazing collection of stories.

A Slanting of the Sun: Stories by Donal Ryan: Read it Today!

“WINNER OF THE PULITZER PRIZE • NOW AN HBO MINISERIES
In a voice more powerful and compassionate than ever before, New York Times bestselling author Elizabeth Strout binds together thirteen rich, luminous narratives into a book with the heft of a novel, through the presence of one larger-than-life, unforgettable character: Olive Kitteridge.
At the edge of the continent, Crosby, Maine, may seem like nowhere, but seen through this brilliant writer’s eyes, it’s in essence the whole world, and the lives that are lived there are filled with all of the grand human drama–desire, despair, jealousy, hope, and love.
At times stern, at other times patient, at times perceptive, at other times in sad denial, Olive Kitteridge, a retired schoolteacher, deplores the changes in her little town and in the world at large, but she doesn’t always recognize the changes in those around her: a lounge musician haunted by a past romance: a former student who has lost the will to live: Olive’s own adult child, who feels tyrannized by her irrational sensitivities; and Henry, who finds his loyalty to his marriage both a blessing and a curse.
As the townspeople grapple with their problems, mild and dire, Olive is brought to a deeper understanding of herself and her life–sometimes painfully, but always with ruthless honesty. Olive Kitteridge offers profound insights into the human condition–its conflicts, its tragedies and joys, and the endurance it requires.” – Goodreads

Olive Kitteridge by Elizabeth Strout is a Pulitzer-Prize-winning collection of short stories gathered together to form a novel. At first glance, these stories do not seem to have much to do with each other, but if you look closely you will see that the book’s namesake, Olive Kitteridge, appears in each one – whether as a primary character, supporting character, or sometimes merely by being mentioned by another character.

Life in Crosby, Maine appears to be a lonely one for most of the characters in this novel. Most of the narratives touch on relationships in some form – relationships ending, newly forming, those that are empty, collapsing, or gone. The stars of our stories all seem to be struggling through emotional hard times, sometimes wondering if life is worth all of this effort. Yet – despite this sense of drudgery, hope prevails just as frequently, often appearing unexpectedly.

Throughout these various narratives, we observe as Olive journeys through life: her marriage, her relationship with her son, and life’s trials as they come. She is a harsh and intimidating woman, often not caring about the effect she has on those around her. Alternately, Olive at other times displays the capacity for true kindness, caring, and understanding. As we travel through the novel, we see Olive growing as a character, as a woman – watching as she gains self-awareness, as some of her hard edges are softened, as some light begins to break through to the darkness inside her.

Strout’s writing is brilliantly real – touching those parts of inside our souls that sometimes even we didn’t know were there.  In each of the 13 narratives of Olive Kitteridge, I recognized emotions or situations that I have personally felt or experienced. It is truly magic when a writer can bring one to their knees with the depth of the emotion in their writing – and Elizabeth Strout absolutely has that magic.

Shannon Will is twenty-eight and has made six trips to rehab (not that anyone’s counting). But this time, she swears, will be different. She’ll clean up her act, go to meetings, find a sponsor, and make a clean break with her past—starting with a new phone number.
But old ties aren’t so easy to sever. When Shannon’s new phone starts getting messages she was never meant to see, Shannon has to decide whether to risk getting involved, or stay safely disconnected.
Gripping, suspenseful and smart, Disconnected is a riveting tale of addiction and obligation, secrets and redemption. – Goodreads

Friends, allow me to begin by saying that I am a huge fan of author Jennifer Weiner; I have been her loyal follower from the moment I cracked open her debut novel, Good in Bed, way back in 2001. Apparently, two years ago Weiner started the tradition of releasing a short story each Halloween season, specifically with darker themes attached to them. In 2011 there was Recalculating, and in 2012 there was A Memoir of Grief. This year, in 2013, Weiner’s Halloween release was an eShort story titled Disconnected.

When we begin Disconnected, Shannon has just finished her sixth stint in rehab – literally, as in, she’s walking out the door. Her first stop is a wireless phone store – she needs a new phone, and a new phone number; in rehab she was told she needed to “disconnect” herself from all of her former friends and acquaintances. She gets a cute little touchscreen, and the cute salesman leaves his number in her new contact list. Hmmm – new romance so soon? Oooh, so NOT recommended by AA, Shannon! Shortly after returning to her empty apartment, Shannon receives a picture message – it’s a bottle of OxyContin, one of her former drugs of choice. Soooo not chill, folks.

The next day, Shannon hightails it to visit Devonte at the T-Mobile store. He explains that the text was likely meant for the previous owner of her new phone number, and advised her to ignore it. Unfortunately, that night, a series of further texts arrive on Shannon’s screen. Creepy and disturbing messages and pictures, that remind her of somewhere she’s once been herself. Shannon is overcome with the sense that someone is in trouble and needs to be saved – by her specifically – but what to do? She’s a former drug addict with no car, no friends, and no money! Of course, she calls good old Devonte from T-Mobile and requests a ride around town while she hunts down the damsel in distress. What follows is vindication, followed by dreaded awareness, followed by a new awakening.

I did enjoy Weiner’s story this Halloween. For some reason I felt a connection to Shannon that I hadn’t felt to the characters in her other eShort stories in the past (pun not intended). Weiner did an excellent job detailing the dreadful downward spiral that addiction causes in one’s life by replaying flashbacks of Shannon’s past before her downfall. Obviously, one can’t expect a huge amount of depth to this work – it is a mere 38 pages. All in all, Disconnected was a nice little tale of loss, suspense, heroism, and redemption all rolled into one enjoyable quickie. Bravo, Jenn, bravo!

One last tasty little tidbit, friends: this year’s eShort story has a special Halloween treat — it features a character that will make an appearance in Weiner’s highly anticipated forthcoming novel, All Fall Down, due for publication on April 1, 2014!

Friends, as you may have noticed, I haven’t been reading much this year. Unfortunately, I have been dealing with a six-month Reading Slump From Hell. Luckily for me, my fantastic friend, Amy Allen Clark, of @momadvice brought me onto her podcast to see if she could cure my ills. ⁣
⁣
⁣
⁣
⁣
⁣