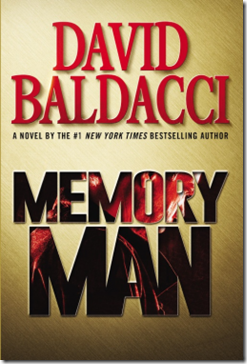 The first time was on the gridiron. A big, towering athlete, he was the only person from his hometown of Burlington ever to go pro. But his career ended before it had a chance to begin. On his very first play, a violent helmet-to-helmet collision knocked him off the field for good, and left him with an improbable side effect–he can never forget anything.

The second time was at home nearly two decades later. Now a police detective, Decker returned from a stakeout one evening and entered a nightmare–his wife, young daughter, and brother-in-law had been murdered.

His family destroyed, their killer’s identity as mysterious as the motive behind the crime, and unable to forget a single detail from that horrible night, Decker finds his world collapsing around him. He leaves the police force, loses his home, and winds up on the street, taking piecemeal jobs as a private investigator when he can.

But over a year later, a man turns himself in to the police and confesses to the murders. At the same time a horrific event nearly brings Burlington to its knees, and Decker is called back in to help with this investigation. Decker also seizes his chance to learn what really happened to his family that night. To uncover the stunning truth, he must use his remarkable gifts and confront the burdens that go along with them. He must endure the memories he would much rather forget. And he may have to make the ultimate sacrifice.

Memory Man will stay with you long after the turn of the final page.” – Publisher Summary

I remember when good old James Patterson began letting other people write his books co-writing his books (and y’all, I fully believe this was happening long before he admitted it). Until that point, I’d been somewhat of a (closet) fan; when I sensed the shift in writing style, it just didn’t work for me anymore and I ceased to read his novels. While reading David Baldacci’s most recent novel last week, I had to wonder if he were not taking a cue from Patterson. But more on that later…

Memory Man is touted as a standalone novel, starring one Amos Decker: ex-NFL player, former cop, and owner of a photographic memory unlike that which most of his doctors have ever seen. Currently an down-and-out PI, Decker is brought back to the police force as a consultant when a tragic massacre takes place at his former high school. As he begins to investigate, it becomes more and more clear that the killer (killers?) is personally connected to Decker, and is committing these murders in his honor. Hooking up with his former partner and a newbie journalist, Decker slowly solves the mystery of who the murderer is, and he sets off on his own to settle the score once and for all.

After reading the first few chapters of Memory Man, my first thought was, “There is NO WAY that David Baldacci wrote this book.” Well, actually, my first thought was that this was kind of crappy writing, but since it led to the main point, I left it out. Except I didn’t. Because I just told you about it. So now you know. It’s true, though, y’all – if I had been handed this book without the author’s name, after reading it I would have assumed that the author was new to the scene and still pretty wet behind the ears. I could be wrong. Maybe Baldacci was just drunk while he wrote it. But I suspect not; I suspect the hands of another wrapped up in this little package. I may be calling it completely wrong but time will tell, y’all, time will tell.

Would I recommend Memory Man to a fellow reader? Eh, maybe, depending on who it was. The truth is, this is a nice mystery novel that would be perfect for passing the time if you didn’t have anything else to read. OK, wait – that still wasn’t very complimentary. Let’s try again. Memory Man is a book that would/will be enjoyed by many mystery fans out there who are not as picky as myself. For those who are familiar with Baldacci’s work, maybe not so much. But I would tell you to go ahead and check it out if you have the urge to do so – you’ll never know unless you try!