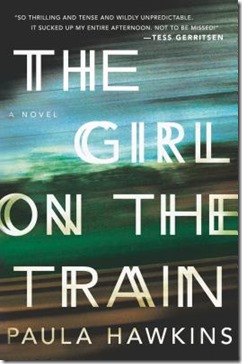 “A debut psychological thriller that will forever change the way you look at other people’s lives.

Rachel takes the same commuter train every morning. Every day she rattles down the track, flashes past a stretch of cozy suburban homes, and stops at the signal that allows her to daily watch the same couple breakfasting on their deck. She’s even started to feel like she knows them. “Jess and Jason,” she calls them. Their life—as she sees it—is perfect. Not unlike the life she recently lost.

And then she sees something shocking. It’s only a minute until the train moves on, but it’s enough. Now everything’s changed. Unable to keep it to herself, Rachel offers what she knows to the police, and becomes inextricably entwined in what happens next, as well as in the lives of everyone involved. Has she done more harm than good?

A compulsively readable, emotionally immersive, Hitchcockian thriller that draws comparisons to Gone Girl, The Silent Wife, or Before I Go to Sleep, this is an electrifying debut embraced by readers across markets and categories.” – Goodreads

I generally shy away from certain types of books. For example: books that everybody is rushing to read, books with crazy hype, books being compared to other books with crazy hype, etc. So, you ask, why did I read The Girl on the Train by Paula Hawkins as soon as it was released? Because I’m a sucker, y’all. I fell for the hype, I did – but the thing is, with this novel, you should totally believe the hype! You could even go so far as to safely accept the comparisons to Gone Girl (I know, I know – told you I was a sucker).

The biggest similarity would be that of the unreliable narrator – or in this case, narrators. There are three of them in this novel, along with three kinds of crazy. Rachel is an insecure, obsessive, unemployed, raging alcoholic. Anna is the self-centered, paranoid, anxious new mother who stole Rachel’s husband. Megan is a woman with a shady past, and who has recently gone missing. All three women are their own kind of dysfunctional, and none of them are what they seem.

Another similarity for me was the suspense. Now, I will admit that it took me a minute to get into the novel, but once I did – whew! Once I became entangled in the story’s web, I was hooked and I raced through the chapters to see what was going to happen next. I read most of the novel in one sitting (to the chagrin of The Boy, who had to make his own lunch). There is a certain darkness to this twisted and sinister tale that kept the anxiety level just high enough to hold my attention through to the very end.

Now, unlike Gone Girl, the shocking twist was not all that shocking for me, as I had already fingered the villain long before the storyline revealed all, but this still didn’t take away from the intensity of the tale. As I said earlier, y’all – the hype is real, and if you’re looking for a book to lose yourself in for a bit, this is one you do not want to miss!

The Girl on the Train by Paula Hawkins: Read it today!