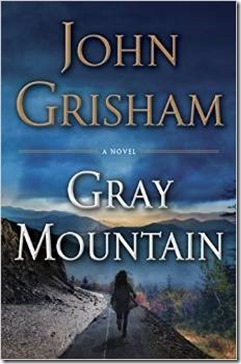 “John Grisham has a new hero . . . and she’s full of surprises

The year is 2008 and Samantha Kofer’s career at a huge Wall Street law firm is on the fast track—until the recession hits and she gets downsized, furloughed, escorted out of the building. Samantha, though, is one of the “lucky” associates. She’s offered an opportunity to work at a legal aid clinic for one year without pay, after which there would be a slim chance that she’d get her old job back.
In a matter of days Samantha moves from Manhattan to Brady, Virginia, population 2,200, in the heart of Appalachia, a part of the world she has only read about. Mattie Wyatt, lifelong Brady resident and head of the town’s legal aid clinic, is there to teach her how to “help real people with real problems.” For the first time in her career, Samantha prepares a lawsuit, sees the inside of an actual courtroom, gets scolded by a judge, and receives threats from locals who aren’t so thrilled to have a big-city lawyer in town. And she learns that Brady, like most small towns, harbors some big secrets.
Her new job takes Samantha into the murky and dangerous world of coal mining, where laws are often broken, rules are ignored, regulations are flouted, communities are divided, and the land itself is under attack from Big Coal. Violence is always just around the corner, and within weeks Samantha finds herself engulfed in litigation that turns deadly.” – Goodreads

Well. It’s about time, y’all. Twenty-one years after Darby Shaw’s shining debut in John Grisham’s The Pelican Brief, he finally introduces his readers to a new female protagonist: Meet Samantha Kofer, former associate attorney at a prestigious law firm in New York City, who has been displaced after the 2008 collapse of Lehman Brothers and the beginning of America’s most recent recession. Luckily, Samantha’s firm makes her an offer that most of her co-workers do not receive: work for free at a non-profit legal aid clinic for one year, and possibly be brought back to her former position at the exclusive Wall Street law firm.

Thus, Samantha finds herself in the middle of coal country: Brady, Virginia, population 2200. The staff of the Mountain Legal Aid Clinic – Mattie, Annette, Claudelle, and Barbara – welcome Samantha into their chaotic midst and introduce her to real-life law: working face-to-face with real people in real trouble, facing opponents in the courtroom, and fighting for justice. Samantha takes clients under her wing and fights for them – spurring investigations that, in coal country, can mean big trouble for her clients – and for herself.

To echo many others, Gray Mountain: A Novel by John Grisham (October, 2014) is primarily an “issue” novel – Grisham is making a strong statement about coal mining and its evils, specifically mountain-top strip mining and the destruction it brings about to both the environment and to the defenseless population of Appalachia. It is this statement, however, that takes over the novel and keeps it from becoming what it could be. I felt that there was potential for a great story here, but instead there were a collection of various plot lines, none of them especially pulse-quickening. Grisham’s writing is flawless as ever, of course, and Gray Mountain is still a good read, although die-hard Grisham fans might feel a tad disappointed. If you’re looking for a dazzling legal thriller, you might want to look elsewhere. If you’re looking for a good read about environmental issues relevant to the population today, you’re in the right place. You can check out the book trailer for Gray Mountain below: