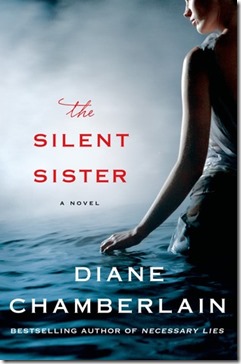 “In The Silent Sister, Riley MacPherson has spent her entire life believing that her older sister Lisa committed suicide as a teenager.  Now, over twenty years later, her father has passed away and she’s in New Bern, North Carolina cleaning out his house when she finds evidence to the contrary.  Lisa is alive.  Alive and living under a new identity.  But why exactly was she on the run all those years ago, and what secrets are being kept now?  As Riley works to uncover the truth, her discoveries will put into question everything she thought she knew about her family.  Riley must decide what the past means for her present, and what she will do with her newfound reality, in this engrossing mystery from international bestselling author Diane Chamberlain.” – Publisher Summary

Riley MacPherson feels completely alone. Her older sister committed suicide when Riley was only two years old, her mother died when she was eighteen, and now – at the age of twenty-five – her father has passed away. All she has left is her alcoholic, war-veteran brother who suffers from PTSD and hides out in his trailer on a remote acreage. He has made it clear that Riley cannot count on help from him to clear out their father’s home to prepare it for sale.

As she begins the gargantuan task set before her, Riley sets off on a journey of discovery as she comes across more and more information that reveals long-held family secrets and lies. Her most pressing discovery: proof that her dead sister, Lisa, may actually be alive. Stunned, Riley races to to find the truth to this possibility before it is too late – for everyone involved. I find I must end my summary here, my friends, with the fear of revealing too much and ruining the delectable experience of reading this book for yourself…

I have found Diane Chamberlain’s novels to be pretty hit-or-miss. The Silent Sister, however, is most definitely a hit. Chock full of mystery, secrets, suspense, and page after page of explosive discoveries, I found myself on the edge of my seat as I read this 352-page book in one sitting. Chamberlain wrote some solid supporting characters into this tale, some of whom stole my heart from momento uno (i.e. Charlie!).

Being the genius that I am (ha!), I am quite adept at figuring out the secrets and mysteries hidden in a given book that I am reading. I did so with this one, as well – but good ‘ol Diane had a few slippery ones up her sleeve, I will give her that! I was thrown for a loop and more than once left with my mouth hanging open in shock – something that doesn’t happen very often, but that I loooove when it does. I can honestly say I did not expect it from a Chamberlain novel and I now hang my head in shame for underestimating her so.

The Silent Sister is a solid suspense/mystery novel and a bit of a turn off of the beaten path for Diane Chamberlain. It was a solid move for her, and I do hope she continues in this vein; if she does so, one thing is for sure – she will have this reader hanging on her coattails, begging for more.

The Silent Sister by Diane Chamberlain. Buy it, read it, love it.

2 thoughts on “Review: The Silent Sister”