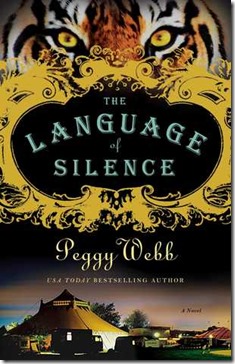 “Following in the footsteps of her tiger-taming grandmother, a woman flees her abusive husband to join the circus in this masterful, heartfelt work of women’s fiction.
Peggy Webb won raves for her debut novel, The Tender Mercy of Roses*, with novelist Pat Conroy calling her “a truly gifted writer.” Now Webb has crafted a poignant portrayal of a woman on the edge seeking solace in the past.
Nobody in the family talks about Ellen’s grandmother Lola, who was swallowed up by the circus and emerged as a woman who tamed tigers and got away scot-free for killing her husband. When Ellen’s husband, Wayne, beats her nearly to death, she runs to the only place she knows where a woman can completely disappear—the same Big Top that once sheltered her grandmother. Though the circus moves from one town to the next, Wayne tracks it, and Ellen, relentlessly. At the same time, Ellen learns more about her feisty, fiery relative, and the heritage that is hers for the taking—if she dares. With her violent husband hot on her trail, Ellen must learn to stand up and fight for herself, to break the cycle of abuse, and pass down a story of love and redemption to her children.” – Publisher Summary

When Ellen was in first grade, she met Wayne Blair – a senior in high school and a predator who marked her and watched her, waiting until she had graduated college and was a new teacher before pouncing. Since Ellen – and all the other girls – had dreamed of becoming Mrs. Wayne Blair for years, she fell hook, line, and sinker. Wayne is one of the wealthiest and most powerful men in town and everyone is jealous of Ellen – but should they be?

It isn’t long before Wayne shows his true colors and begins beating Ellen. After spending her childhood watching her mother submit to her father’s constant bullying and verbal abuse, Ellen was well-versed in the language of silence, and she soon finds it is the only language the women in her life speak. She has no one to turn to. After a failed escape attempt, Ellen finds herself pregnant and more determined than ever to disappear from her nightmare of a marriage.

Ellen decides to follow in the footsteps of Lola – her maternal grandmother – who, years ago, ran away and joined a circus to escape her own abusive husband. She’s been told stories of Lola by her eccentric Aunt Ruth for as long as she can remember and it is Aunt Ruth that Ellen runs to when she makes her move. Together they flee and embark on a hunt for the late Lola’s circus with the hopes of joining the group and travelling with them, cloaked in anonymity that will protect them from Wayne and his cronies.

Under the assumed names of Eve and Mimi Star, Ellen and Ruth infiltrate the circus and find a safe haven in which to hide from Wayne. They discover a fascinating and eccentric group of people willing to accept them as is, without question. Ellen slowly begins to relax and trust again. She falls in love with her new family, as they fall in love with her, and teach her that family is more than who you are born to – family is who you choose, and who chooses you.

The Language of Silence by Peggy Webb is a moving and magical novel that transcends the everyday read and envelops you completely in its fantastical world. A delightful cast of memorable characters float across the pages and capture the reader’s heart time and again. Hope arises for those without hope and best of all is this: the notion that somewhere out there, there is a family for everyone.

The Language of Silence by Peggy Webb. Buy it, read it, love it.

2 thoughts on “Review: The Language of Silence”