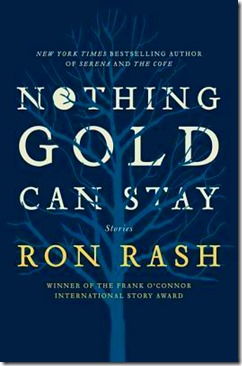 “PEN/Faulkner Award finalist and New York Times bestselling author Ron Rash turns again to Appalachia to capture lives haunted by violence and tenderness, hope and fear, in unforgettable stories that span from the Civil War to the present day.
In the title story, two drug-addicted friends return to the farm where they worked as boys to steal their former boss’s gruesomely unusual war trophies. In “The Trusty,” which first appeared in The New Yorker, a prisoner sent to fetch water for his chain gang tries to sweet-talk a farmer’s young wife into helping him escape, only to find that she is as trapped as he is. In “Something Rich and Strange,” a diver is called upon to pull a drowned girl’s body free from under a falls, but he finds her eerily at peace below the surface. The violence of Rash’s characters and their raw settings are matched only by their resonance and stark beauty, a masterful combination that has earned Rash an avalanche of praise.” – Goodreads

Here’s the thing about short stories: as soon as I become invested in one, it ends. So annoying! This led me to shun short story collections for many years. Recently I got over my prejudice and hopped back on the wagon, and have enjoyed many great works. Unfortunately, after reading Nothing Gold Can Stay by Ron Rash, the frustration has returned ten-fold – because Rash’s writing is just that amazing.

Ron Rash has got it going on, y’all. Going. On. Having previously read two of his older novels (Serena and The Cove), I chose this particular short story collection. It was the right choice. Wow. I was totally blown away. Rash oozes talent like bees make honey.

A prisoner on a road crew planning his escape. Two friends – drug dealers – planning to rip off an old man they knew as young boys. A young girl falls into a stream, headed toward a waterfall. A young married couple heads to the casino. Two fugitive slaves make their way toward freedom. And that’s just Part I.

Rash’s prose is powerful and raw and tears at your heart as you race through the pages. I couldn’t get enough. I will absolutely be reading more of Rash’s work; I will continue to devour his novels and stories like a starving animal until I’ve reached the end of the feast he has given us.

Nothing Gold Can Stay by Ron Rash. Buy it, read it, love it.