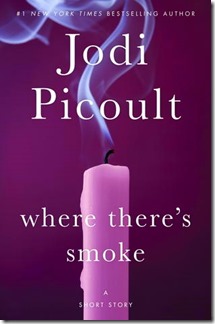 “Bestselling author Jodi Picoult is a masterful storyteller, who “writes with a fine touch, a sharp eye for detail, and a firm grasp of the delicacy and complexity of human relationships” (The Boston Globe). Now, in this original short story, available exclusively as an eBook, Picoult introduces Serenity Jones, one of the fascinating characters from her eagerly awaited new novel, Leaving Time.
Even as a child, Serenity Jones knew she possessed unusual psychic gifts. Now, decades later, she’s an acclaimed medium and host of her own widely viewed TV show, where she delivers messages to the living from loved ones who have passed. Lately, though, her efforts to boost ratings and garner fame have compromised her clairvoyant instincts. When Serenity books a young war widow to appear as a guest, the episode quickly unravels, stirring up a troubling controversy. And as she tries to undo the damage—to both her reputation and her show—Serenity finds that pride comes at a high price.” – Goodreads

There seems to be a new trend these days with authors pumping out eShorts as previews to upcoming new novels. Joshilyn Jackson, Jojo Moyes, Sarah Addison Allen… and now Jodi Picoult. While the aforementioned short stories were all lovely, Picoult has them all beat with her latest digital publication, Where There’s Smoke, featuring one of the three narrators from her upcoming new novel, Leaving Time, due for publication in October, 2014.

Where There’s Smoke features Serenity Jones, an acclaimed psychic who hosts her own top-rated television show. As we meet Serenity, she is visiting on air with a the young widow of a man killed in combat over in Iraq, a man whose spirit is angry at what has happened and who is lashing out at the only one he can communicate with – Serenity. After Serenity reveals a nationally controversial secret about this soldier’s death, things around her begin randomly spontaneously combusting – a TV camera, her kitchen table, her bathroom towels… What could be going on here? In an attempt to distract attention from the poor publicity, Serenity’s producers pressure her to find the kidnapped son of a U.S. senator. She has done this before with stunning results, and will no doubt be successful again – but at what cost?

I couldn’t get enough of this story! Shortly after beginning I was already lamenting the fact that it was merely an eShort, because I was already engrossed with the characters and the drama surrounding them. I am so frustrated that I have to wait until October to meet up with Serenity Jones again! I am, however, so looking forward to seeing who and what else Picoult has in store for us when Leaving Time finally hits the shelves.

Where There’s Smoke by Jodi Picoult is available online only as a digital eShort. Buy it, read it, love it.

2 thoughts on “Review: Where There’s Smoke by Jodi Picoult”