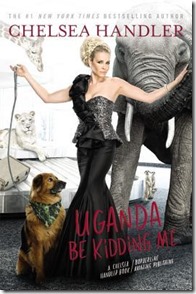 Wherever Chelsea Handler travels, one thing is certain: she always ends up in the land of the ridiculous. Now, in this uproarious collection, she sneaks her sharp wit through airport security and delivers her most absurd and hilarious stories ever.
On safari in Africa, it’s anyone’s guess as to what’s more dangerous: the wildlife or Chelsea. But whether she’s fumbling the seduction of a guide by not knowing where tigers live (Asia, duh) or wearing a bathrobe into the bush because her clothes stopped fitting seven margaritas ago, she’s always game for the next misadventure.
The situation gets down and dirty as she defiles a kayak in the Bahamas, and outright sweaty as she escapes from a German hospital on crutches. When things get truly scary, like finding herself stuck next to a passenger with bad breath, she knows she can rely on her family to make matters even worse. Thank goodness she has the devoted Chunk by her side-except for the time she loses him in Telluride.
Complete with answers to the most frequently asked traveler’s questions, hot travel trips, and travel etiquette, none of which should be believed, UGANDA BE KIDDING ME has Chelsea taking on the world, one laugh-out-loud incident at a time.”  – Publisher Summary

I am a huge fan of Chelsea Handler’s memoirs. She imbues her writing with her humor even better than she does during her night-time talk show. I have laughed out-loud, sometimes hysterically, in public, during the reading of her past books. This may give you an idea, therefore, of the high expectations I had for Uganda Be Kidding Me, Chelsea Handler’s fifth memoir. Perhaps I shouldn’t have raised the bar so high; after all – five memoirs by the age of thirty-eight? At some point, the funny stories are going to run out. Dry up. Get old. Right?

The majority of Uganda Be Kidding me details a Ugandan safari that Chelsea treated herself, her sister, and four other friends to. Let’s just say that much alcohol was consumed, friends were made, crushes were born, and ganja was acquired (and possibly inhaled). Uganda was followed by a trip to the Bahamas where excretory explosions abounded – on the beach, in a kayak, and in the sea. In a bit of a disjointed manner, Chelsea’s storytelling moves back in time to a trip she took to London, one to Montana, and one to Telluride. She follows up these tales with a story about trying to get to brunch with her friends on a Sunday and having a nightmare of a time doing it – I’m not sure how that fit in with the whole “traveling” theme of the book, but there you go. It just doesn’t have very good flow to it – the first third of the book relays her trip to Uganda, then – as mentioned – she skips around chronologically for her stories throughout the rest of her book. I felt like she had begun the book intending to write it entirely about her trip to Africa, but after discovering it wasn’t enough for an entire book, had to scrabble for more material to add.

Is Uganda Be Kidding Me funny? Yes, in many cases. Yet, in many areas it feels as though Handler is trying a little too hard to put herself forward as that crass, abrasive, alcoholic, pill-popping, partying woman she is known to be. I suppose I would say that I was mostly amused by this book as compared to shattered by it’s hilarity. It just didn’t have the magic for me that her previous novels have had. True, nothing is ever going to live up to the fabulousness that is My Horizontal Life or Chelsea Chelsea Bang Bang, but I felt this book in particular fell a little too far from the mark for my taste. On the other hand, a friend read it and opined that this was her favorite book of Handler’s yet. To each his (her?) own…

Uganda Be Kidding Me by Chelsea Handler is currently for sale at a bookseller near you. Buy it, read it… laugh your ass off.

One thought on “Review: Uganda Be Kidding Me by Chelsea Handler”