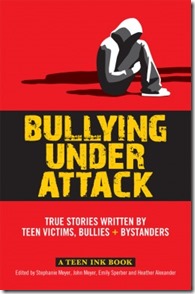 WORDS ARE POWERFUL- they can inflict damage and they can heal. In this anthology of first-person accounts written by teenagers for both their peers and adults, words transform pain into hope and the possibility for change.
Bullying Under Attack is an eye-opening anthology of all three players in the bullying cycle. These conversational essays on life as the bullied, the bully, and the bystander provide insight and inspiration for change. Rather than offer a cumbersome psychological breakdown, this graceful and hard-hitting book places the reader firmly in the shoes of all involved.

The stories written by The Bullied explain the subtleties and agony of harassment, helping readers understand that there is more to unkind words and behavior than “just joking around.” Although many of these teens have suffered through harassment by their peers, their essays are both empowering and inspiring. By exploring the essays by The Bullies, readers will discover that the bullies are often times incorrectly labled as bad kids, but many are simply trying to fit in, despite their own insecurities and fears. While these bullies may still have their own seemingly insurmountable obstacles at home, they share their experiences and insights hoping to manage and reforming other bullies. The section voiced by The Bystander shares tales of those who have regrettably watched and those who have stepped up to help others. Here, readers will find the inspiration to speak out rather than just standing by while others are emotionally harmed.
Whether due to race, weight, or jealousy, there are a myriad of reasons WHY. Included in this startling compendium of personal stories that convey the complexity and nuances of what it means to be bullied, are stories of regret, promises, and encouragement that will help readers find solace during their teen years and show them how—as adults—their words and actions can provide strength and reassurance to others experiencing all aspects of bullying. Ultimately, they will learn to find their voices in order to break the cycle for good.

Written for teens by teens. Readers will gain a unique perspective on what it’s like to be bullied, what makes a bully tick, and what others have done when witnessing bullying in action. Readers will get an in-depth look on this hot-button topic through the point of view of their peers rather than through an adult perspective. In turn, they will be more open to change and will learn how to handle bullying when faced with similar situations. Concerned parents, grandparents, guardians, and teachers will find Bullying Under Attack to be a primer for the internal workings of teens and find ideas on how to better help. Social workers and school counselors who work with teens will find this book both informative and a wonderful resource to give to teens who are struggling with the issues of bullying. Separated into three sections–The Bully, The Bullied, and The Bystander–Bullying Under Attack creates a comprehensible look at the BIG picture and allows readers to better relate to their own struggle. Brief, compelling, and conversational essays make the book a fast and interesting read.” – Publisher Summary

Bullying Under Attack: True Stories Written by Teen Victims, Bullies + Bystanders, edited by Stephanie H. Meyer, John Meyer, Emily Sperber, and Heather Alexander {of Teen Ink}, is a compilation of poetry, photography, and the personal stories of teenagers who have weighed in on various sides of the bullying spectrum. The stories in this book affected me on a deeply personal level. My son was bullied for over a year in elementary school, and it changed him forever. He became severely depressed and ultimately suicidal. It took a very long time to heal from his wounds – if you can call it that; he tells me that he will never forget the experience, as long as he lives. Experiencing the pain, hopelessness, and loneliness through the teen victims’ words was a deeply moving experience. I commend them for the courage it must have taken to speak out, and I rejoice with them for the empowerment that must have come from putting words to their pain. A great deal of courage was also needed for the teen perpetrators of bullying to share their stories of abuse and the reasons behind it, as well as those known as “bystanders” – the sense of guilt and shame these teens felt at not doing anything to stop the bullying they witnessed was immense. All of the teens’ words were profoundly powerful and ultimately unforgettable.

With a foreword written by John Halligan, whose son, Ryan, committed suicide approximately ten years ago as a result of being bullied, and a preface written by Lee Hirsch, the writer and director of the film Bully, the editors of Teen Ink boldly stake their place in the national discourse regarding bullying. After so much information coming at us from “experts”, teachers, administrators, etc., that the dialogue comes from teens – victims, bullies, and bystanders, mind you – is a timely arrival with maximum impact. Words from a particular young woman’s essay, “Kids, Meet the Real World”, by Elizabeth Ditty, jumped out at me as so painfully obvious:

Suicide from bullying is on the rise in young people, but [how often do you hear] of an adult committing suicide over harassment at work? If someone were to call a coworker a “fat whale,” they would be fired or at least face serious discipline. Why isn’t this true in our schools?”

This is a huge issue for me. Why in the world do public school educators think that it is permissible to force their students to endure the torture that goes on in their hallways, when these same educators and administrators would never allow this kind of behavior in their own coworkers? Something I have often heard is, “well, kids need to learn how to deal with the real world.” School is not the real world. School is a fishbowl. But these educators and administrators work in the real world. Do they allow this type of behavior in their “real world”? Of course not! Why should it be in any way acceptable for our children to have to endure it if they themselves would not do so? The damage caused to children and teens who are victims of bullying is immeasurable and lasts a lifetime. Those in a position of power should be doing all that they can to prevent these incidents from occurring instead of turning a blind eye to our children’s suffering. Speaking of suffering, the victims of bullying are not the only ones who are on the losing end of bullying here. Elizabeth Ditty also voiced an opinion that I, myself, have long expressed:

During [school], students should be preparing for the “real world” by learning to accept differences and treat others with respect. Teachers should be observing students as they interact in the halls, and those who bully should be reprimanded. A bully who isn’t taught that his actions are wrong will enter the real world woefully unprepared to interact professionally and respectfully with others.”

Bullying Under Attack is an absolutely essential read for us all: teens, parents, educators, and administrators. We can all learn from the experiences of the youth who so bravely came forward to speak through this publication. This was a much, much needed compilation for our day and times, and Teen Ink did not let anyone down with the masterful job they did in crafting this amazing work of literary confession and opportunity for growth.

Bullying Under Attack: True Stories Written by Teen Victims, Bullies + Bystanders is currently available for purchase. Buy, it, read it… learn from it.

Visit the upper right side bar to sign up for FREE regular updates!