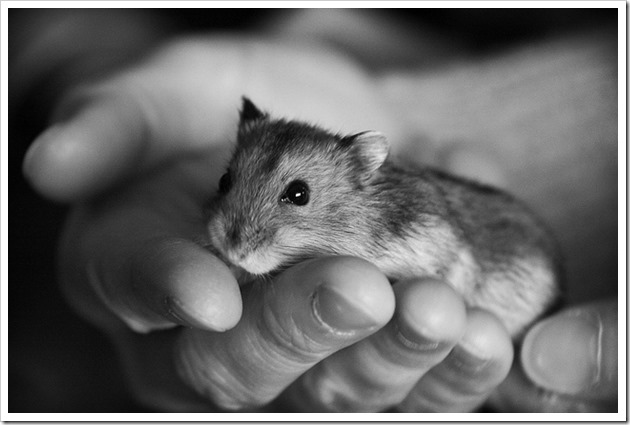 Meet The Boy’s new dwarf hamster. The Boy found it for free on Craigslist, because his Pathologically Literate Momma forgot to use the parental controls to block that particular site. Thus, we are now a family of five: Moi, The Boy, Poppie, Ruby, and… Hammy. His original owner called him It. The Boy promptly named him Bob but shortly thereafter changed it to Hairy Larry. Despite these lovely monikers, all we call the little fella is Hammy, so we finally made it official. Hammy it is. That was pretty much the highlight of our week, other than a couple of trips to the public library. The Boy got to meet with his former mentor through the public schools, which was exciting for him – he had really missed Mr. Johnson, an 84-year-old grandfather who volunteers with the schools. He has agreed to continue his mentoring relationship with The Boy while we homeschool – that was great news. We, of course, had a double sleepover on Friday and Saturday – I try to let The Boy see his school friends as much as possible now that he doesn’t see them during the weekdays anymore. The funny thing is that they are all super envious of him – they want in on the homeschool action, too! All right, y’all, enough blabbing, let’s get down to business. Here’s what I got up to last week:

Books I read this week:

Posts from the week of November 10th:

Upcoming posts for the week of November 18th:

I have to say that Bullying Under Attack truly affected me. The teens who courageously told their stories did such a fantastic job, and it really hit home for me. Keep an eye out for my review on this one. A Grown-up Kind of Pretty was absolutely fabulous! It was the Joshilyn Jackson novel I’ve been looking for – I knew she had it in her! Songs of Willow Frost and Ramadan Sky were good stories, but fell just a little short for me. Disappointing, I’ll have to say. I was engrossed in Devil in the Grove for two days without accomplishing much else – it was absolutely fascinating. The plight of African-Americans during the Jim Crow era and the Civil Rights era has always broken my heart, and the story of the Groveland Boys, one that somehow has escaped most history books, is one that needed to be told – while it was difficult to read (as in upsetting at times), I’m so glad I was able to learn more about them.

We’ve got an exciting week ahead of us. We’re starting our new science curriculum, Earth Science & Astronomy for the Logic Stage by Elemental Science. We’re joining a local homeschool co-op, so we can meet other local homeschooling families and join in on some group activities with them. We’re also going to try to fit in another trip to the library! The Boy will also be working on a special project, in which he will be researching… dwarf hamsters! Yes, folks, leave it to me to turn a free Craigslist rodent into a homeschool lesson. I’ll work with anything as long as it interests him, to be honest with you. As for myself, I’ve got some more great books lined up and some of my own Craigslist shopping to do – I’m on the hunt for some bookshelves. Of course, they have to be just right – my OCD commands that it be so… I hope you have a great week – Happy Reading!

What did you read last week? Tell us all about it!

Please visit the upper right sidebar to sign up for FREE regular updates!