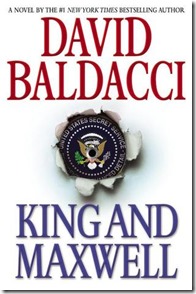 David Baldacci brings back Sean King and Michelle Maxwell-former Secret Service agents turned private investigators, featured in the hit TNT TV series King & Maxwell-in their most surprising, personal, and dangerous case ever . . .
KING AND MAXWELL
It seems at first like a simple, tragic story. Tyler Wingo, a teenage boy, learns the awful news that his father, a soldier, was killed in action in Afghanistan. Then the extraordinary happens: Tyler receives a communication from his father . . . after his supposed death.
Tyler hires Sean and Michelle to solve the mystery surrounding his father. But their investigation quickly leads to deeper, more troubling questions. Could Tyler’s father really still be alive? What was his true mission? Could Tyler be the next target?
Sean and Michelle soon realize that they’ve stumbled on to something bigger and more treacherous than anyone could have imagined. And as their hunt for the truth leads them relentlessly to the highest levels of power and to uncovering the most clandestine of secrets, Sean and Michelle are determined to help and protect Tyler–though they may pay for it with their lives.” – Goodreads

OK, y’all, let’s get this party started. I’m just going to come right out and say that I think it is just a tad bit cheesy that the sixth installment of the Sean King and Michelle Maxwell series by David Baldacci, titled King and Maxwell, has the same name as the “hit TNT series King & Maxwell” – which is, of course, based on said literary series. Now, don’t get me wrong; I’m hooked on this series – the book series, that is. It is one of my “guilty pleasure” series, as in, I’m kind of embarrassed to admit I read them, and they’re so formulaic and easy to predict but oh-so-good that I just can’t pass them up! But let’s talk a little bit more about this book vs. TV show dilemma we’ve got going on here.

Now, I happened to notice that the “witty repartee” between dear Sean and Michelle happened to be somewhat wittier than ever before. So witty, in fact, some of the scenes would make, shall we say, a great scene for… a TV show, perhaps? Now, maybe Baldacci perked things up to go along with his spiffy new TV series or not (I suspect YES), but the final determinant for me will be finding out whether or not an episode of the show is based on this particular novel. I shall have a teensy bit to say if that is to happen. Although, perhaps it already has… oh, now I have to go search the interwebz for past episodes of King and Maxwell, the TV show, to find out if this is a conspiracy after all, or not. Oh, the suspense… the drama… I can hardly take it!

Now. With the exception of the spiffed-up-for-TV dialogue, King and Maxwell is a pretty good read. It is not necessarily a realistic or even completely logical plot, but it is still a good read. Basically, Sam disappears while on a mission in Afghanistan. His teen son, Tyler, hires Sean and Michelle to find out what happened, because those Army bigwigs, well, they just don’t sound to him like they’re on the up and up. Partially because their stories keep changing, but mainly because Tyler received an email from his dad over a day after he supposedly bit the big one. Well. The government does not like King and Maxwell on this case. Nor does another vested party who stands in the shadows, waiting to hatch his evil plan (which, y’all, really just didn’t seem all that excitingly evil once it happened, if you ask me). Much chaos, car chasing, and gunfire ensues, along with the reappearance of a past friend to join in on the fray. Oh, yes, and don’t forget that witty repartee I mentioned earlier. That’s there in the mix, as well.

So, is King and Maxwell the best novel in the King and Maxwell series? Ummmm…. no. Probably not the second best, either. The plot is very loosely cobbled together (kind of like in, say, a TV show). But it works. It makes for a pleasant, yet still exciting read. And, most importantly, it gives us King and Maxwell fans our fix. Now we just have to wait for the next one. Oh, wait – will the TV series ruin that whole plan, now? Stupid TV. I’ll tell you what, friends, you should just go in your family room right now, pick up your TV and throw it out the window. Seriously. Read a book or play with your kids or call a friend instead. Since we started homeschooling the only TV we’ve watched was one documentary for a school assignment. That’s in 2 1/2 months, folks. Don’t miss it at all (although I do understand that Long Island Medium has been recording on my DVR… I might be just a leeetle tempted).

King and Maxwell by David Baldacci is available for purchase on November 19, 2013. Buy it. Read it. Love it.

Enjoy this post?
Be sure to visit the upper right sidebar to sign up for FREE regular updates!

One thought on “Review: King and Maxwell by David Baldacci”

Book 69 of 2021 is 𝘼𝙡𝙡 𝙏𝙝𝙚𝙨𝙚 𝙒𝙖𝙧𝙧𝙞𝙤𝙧𝙨, by Amy Tintera. ⁣
Book 68 of 2021 is 𝙏𝙝𝙚 𝙂𝙞𝙧𝙡𝙨 𝙄’𝙫𝙚 𝘽𝙚𝙚𝙣, by Tess Sharpe. ⁣
Book 67 of 2021 is 𝙒𝙝𝙞𝙡𝙚 𝙒𝙚 𝙒𝙚𝙧𝙚 𝘿𝙖𝙩𝙞𝙣𝙜, by Jasmine Guillory. ⁣
After a long week, with little time to myself, I’m settling down for an afternoon of reading and solitude – feels like just what the doctor ordered!!
Book 66 of 2021 is Love At First Fight, by Sandhya Menon.
Starting my day off with some extra-strong coffee and 𝙒𝙝𝙞𝙡𝙚 𝙒𝙚 𝙒𝙚𝙧𝙚 𝘿𝙖𝙩𝙞𝙣𝙜, by Jasmine Guillory. ⁣