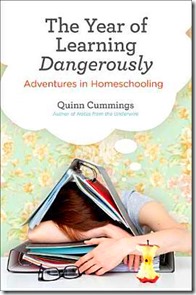 Think homeschooling is only for a handful of eccentrics on either end of the political spectrum? Think again. Today in America, two million primary- and secondary-school students are homeschooled. Growing at a rate of 10 percent annually, homeschooling represents the most dramatic change in American education since the invention of the mimeograph–and the story has only just begun.
In The Year of Learning Dangerously, popular blogger, author, and former child actor Quinn Cummings recounts her family’s decision to wade into the unfamiliar waters of homeschooling–despite a chronic lack of discipline, some major gaps in academic knowledge, and a serious case of math aversion. (That description refers to Quinn.)
Trying out the latest trends, attending key conferences (incognito, of course), and recounting the highlights and lowlights along the way, Quinn takes her daughter’s education into her own hands, for better and for worse. Part memoir, part social commentary, and part how-not-to guide, The Year of Learning Dangerously will make you laugh and make you think. And it may or may not have a quiz at the end. OK, there isn’t a quiz. Probably. – Goodreads

Having recently made the decision to homeschool my twelve-year-old son, I have been doing much research on the subject – to the point of OCD-overload, actually… Thus, when I picked up The Year of Learning Dangerously: Adventures in Homeschooling by Quinn Cummings, I received an unexpected, true breath of fresh air. The Year of Learning Dangerously is Cummings’s memoir of the first year of homeschooling her ten-year-old daughter after several years of both public and private schooling. Cummings researched and experimented with various homeschooling methods and styles, which makes for both interesting and humorous reading.

While many homeschooling families are committed to doing so partially – or primarily – for religious reasons, Cummings’s motivation and views are purely secular. In fact, the entire situation was spurred on by long division… Her daughter did not like long division, and although she finally had mastered it, as she progressed to each grade level, she convinced her new teachers that she had no clue how to do it. Despite what Cummings would tell the teachers, they would believe her daughter – and not require from her the work that was necessary to master her current grade’s math requirements. This spurred Cummings to transfer her daughter to a strict private school in the hopes that the instructors there would not accept her excuses, however, the predicament continued. Cummings and her husband decided to spend a one-year trial period homeschooling their daughter in an attempt to make sure she received the education she needed, without being able to wiggle her way out of learning things that she found too annoying or difficult.

Cummings’s “research” seems to be mostly internet searches and a few in-person experiences at homeschooling conferences and other events, such as a homeschool prom and a homeschool graduation ceremony. She admits at one point that she is sharing “the lowest averages” of homeschooling research data, for some reason that was unclear to me. Cummings appeared to be reluctant to step out as a staunch supporter of homeschooling in general, instead choosing to pick apart its intricacies for her readers’ “enjoyment”. Dedicated homeschoolers may well be put off by her stereotypical views and fun-poking comments as she works her way through various methods of homeschooling. This is definitely not the book to read if you are looking for serious research into the homeschooling world. While there is some interesting information shared here, little of it is useful in the way a homeschooling parent might hope it would be.

The Year of Learning Dangerously is much more simply a humorous, heartwarming tale of one family’s journey through their first year of education at home. As most homeschooling families would expect, Cummings’s tale is full of trial and error, crippling self-doubt, comic mishaps, and joyful triumph. It was quite the enjoyable read for me in the middle of much more serious research, and I’m hopeful to hear more from Quinn Cummings about her homeschooling adventures in the future.

2 thoughts on “Review: The Year of Learning Dangerously: Adventures in Homeschooling”