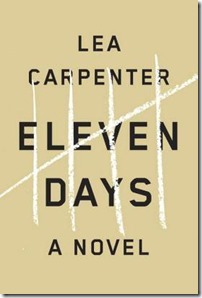 Powerful and lean, Eleven Days is an astonishing first novel full of suspense that addresses our most basic questions about war as it tells of the love between a mother and her son. When the story opens on May 11, 2011, Sara’s son, Jason, has been missing for nine days from a Special Operations Forces mission on the same night as the Bin Laden raid. Smart, young, and bohemian, Sara had dreams of an Ivy League university for Jason that were not out of reach, followed by a job on the Hill where there were connections through his father. The events of 9/11 changed Jason’s mind and Sara accepted that, steeping herself in all things military to better understand her son’s days, while she works as a freelance editor for Washington policy makers and wonks.
Now she knows nothing more about Jason’s fate than the crowds of well-wishers and media camped out in the driveway in front of her small farmhouse in Chadds Ford, Pennsylvania, waiting to hear news. In a series of flashbacks we learn about Jason’s dashing absentee father, a man who said he was a writer but whose career seemed to involve being in faraway places. And through letters Jason writes home from his training and early missions, we get a picture of a strong, compassionate leader who is wise beyond his years and modest about his abilities. Those exceptional abilities will give Jason the chance to participate in a wholly different level of assignment, the most important and dangerous of his career. At the end Sara will find herself on an unexpected journey full of surprise.
This is a haunting narrative about a mother’s bond with her son; about life choices; about the military, war, and service to one’s country. Lea Carpenter, a dazzling new talent with the kind of strong and distinctive voice that comes along all too rarely, has given us a thrilling and unforgettable story.” – Goodreads

Eleven Days by Lea Carpenter is a moving love story – not one of a man and woman, but that of a mother and her son. Sara has been a single mother for the entirety of her son’s {Jason} life. His late father was a CIA operative who was only marginally involved with the family before his death. Sara and Jason have a close relationship, and she has grand plans for his education after high school, dreaming of an Ivy League university experience for him. Unfortunately, after the attacks on September 11, 2001, Jason is compelled to join the military and chooses to attend West Point for his secondary education. After graduation he moves on to serve with the Navy SEALs, moving across the country and traveling around the world. Mother and son maintain their relationship through phone calls and email, and Sara does her best to keep her fear and worry in check and out of sight from Jason.

In May, 2011, Sara receives word that Jason is missing in action after  participating in a Special Operations Forces mission – where, the military will not tell her. Jason’s best friend Sam moves in with Sara to offer her support and to make sure she is taken care of during this time of fear and pain – this is a promise that he had made to Jason years ago, in the event something like this should happen. Sam’s presence is comforting; without his insistence, Sara would not eat or care for herself – she is in a state of numbness and fear.

Sara and Jason have friends in high places, thanks to Jason’s late father. After eleven days of missing in action, Sara receives a call – Jason has been found. She is to board a flight immediately and will be taken to him – still ignorant of where she is going. On the way, she is confronted by someone from her past who creates a maelstrom of emotion as he joins her for the remainder of her journey toward her son. In addition to dealing with the drama of her unexpected travelling partner, Sara is vexed with the uncertainty of what awaits her when she reaches her destination. What has happened to Jason? Is he healthy, or has he been injured? All Sara knows is that she is flying toward the one she loves most in the world and she hungers for the moment they meet again.

This is a tale of love, sacrifice, and the bond between a mother and son. I have to say that I wanted to like this novel more than I actually did; Carpenter ventured a little too far into both the technical and the philosophical side of war and the military for my tastes. I had been expecting something more specifically about a mother and son and not so much of a focus on the rest. The story of Jason’s father, David, is somewhat unrealistic and toward the end, forced and unbelievable. It bothered me that mother and son didn’t see each other very often, and that Sara held parts of herself back from Jason. This is purely a personal issue for me, as the single mother of an only son, myself, it was just a hard living situation to imagine. Don’t even get me started on Jason’s time missing in action…  I have already made The Boy swear on his life that he will never, ever join the military unless forced by the government to do so. I could not bear for something like that to happen to my baby boy! I would not survive the eleven days, at least not with my sanity intact. My heart goes out to military moms and families everywhere.

Interestingly enough, Lea Carpenter wrote in an article on the Huffington Post that when she began to write this novel, she wanted to write something based on her relationship with her own father, who was in the military. Although this wound up being about a mother and her son, she was still able to capture the dynamics of this type of relationship – of loving someone whose experiences are so very different from your own. Eleven Days is definitely not a book I would re-read, but it was interesting and somewhat informative, as well. I can safely recommend this as a book you might pick up if you’re in need of something to read – but if I were you, I’d stick to a library copy. Just sayin’.

One thought on “Review: Eleven Days by Lea Carpenter”