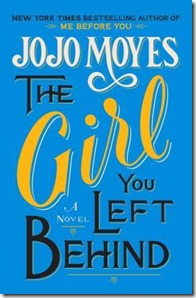 From the New York Times–bestselling author of Me Before You, a spellbinding love story of two women separated by a century but united in their determination to fight for what they love most
Jojo Moyes’s bestseller, Me Before You, catapulted her to wide critical acclaim and has struck a chord with readers everywhere. “Hopelessly and hopefully romantic” (Chicago Tribune), Moyes returns with another irresistible heartbreaker that asks, “Whatever happened to the girl you left behind?”
France, 1916:  Artist Edouard Lefevre leaves his young wife, Sophie, to fight at the front. When their small town falls to the Germans in the midst of World War I, Edouard’s portrait of Sophie draws the eye of the new Kommandant. As the officer’s dangerous obsession deepens, Sophie will risk everything—her family, her reputation, and her life—to see her husband again.
Almost a century later, Sophie’s portrait is given to Liv Halston by her young husband shortly before his sudden death. A chance encounter reveals the painting’s true worth, and a battle begins for who its legitimate owner is—putting Liv’s belief in what is right to the ultimate test.
Like Sarah Blake’s The Postmistress and Tatiana de Rosnay’s Sarah’s Key, The Girl You Left Behind is a breathtaking story of love, loss, and sacrifice told with Moyes’s signature ability to capture our hearts with every turn of the page.” – Publisher Summary

Without a doubt the most compelling narrative of The Girl You Left Behind is that of Sophie Lefevre. It is fascinating to me that so little has been written about Germany’s first occupation of France during World War I, which seems to have been just as horrific as their second occupation of the country nearly thirty years later. After the Germans take control of Sophie’s village, the new Kommandant orders her, along with her sister Helene, to open their hotel to the German officers for dinner each evening. The Kommandant sees a portrait of Sophie painted by her husband, Edouard – who is fighting at the front – and becomes more and more taken with her as time passes. Soon Sophie learns that Edouard has been taken prisoner and sent to a camp. She takes the biggest risk of her life in approaching the Kommandant with an offer that might ensure Edouard’s freedom… will she succeed, or will she fail and be scorned by her village forever as a traitor? A century later, Liv Halston is the owner of Sophie’s portrait, which was given to her by her late husband David. Liv is struggling in the wake of David’s death – emotionally and financially. Soon she learns that there is a question as to the ownership of the portrait she so dearly loves, and begins a battle to hang on to her last memory of the husband she lost far to soon.

Not only a story of love and loss, The Girl You Left Behind also examines the blurry, gray areas between the black and white of right and wrong. Both LIv and Sophie are faced with choices that to them seem obvious and unavoidable, but to the outside world appear to be selfish and unforgivable. Both women are treated as pariahs by their former friends and neighbors; Liv actually becomes a nationally hated public figure in the media. It was a fascinating glimpse into the world of recovering art looted by Germans during the World Wars. Moyes did portray quite the cynical view of the motives of the families of former victims; I’m not sure it’s an accurate portrayal of the real-life people involved in these cases – at least, I hope not.

As I mentioned previously, I found Sophie Lefevre’s story to have much more depth and to be much more compelling than Liv Halston’s – although Liv’s storyline was captivating, as well. But I found myself waiting breathlessly as I read for more of the glimpses back into Sophie’s world that are interspersed within the novel. It’s just such an amazing story – so heartbreaking and tragic. The suspense builds and builds as we wonder: what happened to Sophie? Liv desperately searches for this answer as well, travelling all the way to Sophie’s former village and meeting with her descendants. Piece by piece things come together, but it seems as though there is never a truly clear answer – until the very end. Oh, y’all! What I discovered had me jumping up and down and screaming! Was it in agony? Joy? You will have to find out for yourselves. Don’t miss out on your chance to find out! Read The Girl You Left Behind today!

The Girl You Left Behind is available for purchase as of August 20, 2013.

3 thoughts on “Review: The Girl You Left Behind by Jojo Moyes”