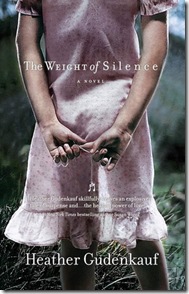 It happens one August morning. As dawn’s light drenches the humid Iowa air, two families awaken to find their little girls have gone missing.
Seven-year-old Calli Clark is sweet, gentle, a dreamer who suffers from selective mutism brought on by tragedy as a toddler. Calli’s mother, Antonia, tried to do the best she could within the confines of marriage to a mostly absent, often angry husband. Though she denies that her husband could be involved in the possible abductions, she fears her decision to stay has cost more than her daughter’s voice.
Petra Gregory is Calli’s best friend and voice. But neither Petra nor Calli has been heard from since their disappearance was discovered. Desperate to find his child, Martin Gregory is forced to confront a side of himself he did not know existed beneath his intellectual demeanor.
Now these families are tied by the question of what happened to their children. And the answer is trapped in the silence of family secrets.” – Goodreads

The Weight of Silence by Heather Gudenkauf is an intense, fast-paced novel that captivated me from the first chapter and kept me on the edge of my seat until I finished the book later the same day. I simply could not put it down – I had to read it in one sitting. Gudenkauf tells her story through multiple narratives; she skillfully captured each character’s unique voice. She created complex characters and wove them together to form a cast that fit together perfectly. Things flowed smoothly, as each person’s various narratives were relatively short chapters, keeping things moving quickly along. This fast pace helped to ratchet up the suspense and heighten the reader’s sense of anxiety over the outcome. I was captivated from the start and couldn’t wait to find out what was going to happen next.

Our story is narrated mainly by five characters: Calli, Antonia, Ben, Martin, and Deputy Sheriff Louis. Calli is a seven-year-old selective mute. Her best friend, Petra, communicates with her better than anyone and is often Calli’s “voice” for the world. Antonia is Calli’s mother, Ben is her older brother. Calli’s father, Griff, is a violent alcoholic. Petra lives with her mother and her father, Martin. Deputy Sheriff Louis is Antonia’s former childhood love, who still harbors hidden feelings for her despite both of their current marriages.

As the story opens, it is discovered, very early in the morning, that Petra – and Calli – have disappeared sometime in the night. Things become increasingly frantic as the day moves on. Not helping the situation is the fact that one year ago, another young girl was kidnapped and found murdered near their town. The story takes place over approximately twenty-four hours, which is a short period of time to write about, but I think this is why the novel works as well as it does. The pace moves so swiftly that it reflects the chaotic aura that surrounds Calli’s and Petra’s families and this serves only to heighten the sense of drama. Gudenkauf addresses themes such as family dynamics, friendship, domestic violence, alcoholism, parenting, and motherhood. 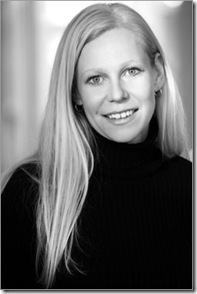 I find it interesting that in the book Calli is a selective mute because in her own childhood, Heather Gudenkauf was born with profound unilateral hearing loss. Though she wore hearing aids throughout much of her childhood, her hearing impairment caused her difficulty in conversing and forming friendships – much the same as Calli experienced due to her lack of speech. I think this parallel can be seen in the empathy Gudenkauf weaves into Calli’s character. The one… “flaw”, though I hesitate to even call it that, is that the ending is a tad bit predictable. It’s just a little bit… too nicely tied up, if you know what I mean. Personally, I didn’t mind this; I thought it was a fabulous story and was perfectly happy with the way it ended, but I can see where this would be a complaint for certain readers.

The Weight of Silence by Heather Gudenkauf is an intense, captivating novel that will excite you to no end. You will not be bored reading this book, I assure you. Yet this book goes so much deeper than just suspense. There are so many layers woven into this novel that it will hold your focus until you have to force yourself to put it down. So head on down to the library or bookstore and hook yourself up today! Oh, and don’t forget to check out the book trailer below (ignore the 7/28 date, the book is currently available for purchase).

The Weight of Silence by Heather Gudenkauf: Book Trailer

2 thoughts on “Review: The Weight of Silence by Heather Gudenkauf”