I’m a loyal reader of several different book series. I don’t usually review these books because it is hard for me not to refer to previous books in the series or otherwise make obscure references that would confuse you. That said, I’ve read a few great books lately that bear mentioning, so… I’m mentioning them. Read it and weep. 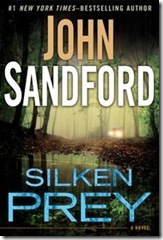 First up, we have Silken Prey by John Sandford. I’ve been reading the Prey series since high school and while literary genius it is not, they’re really fun books. Somewhat formulaic, but in a good way. Lucas Davenport works for the Minnesota Bureau of Criminal Apprehension. He’s asked to investigate the possibility that incriminating evidence against a senatorial candidate may have been planted. Soon, people related to the campaign are disappearing and dying. The opposing senatorial candidate is a young, up and coming woman who appears to be untouchable. Could she be involved in her opponent’s manufactured downfall and the subsequent violence? Or is someone else lurking in the shadows, manipulating all according to his every whim? Fast-moving, action-packed, and a great read.

A series I recently discovered is one of my favorites ever! Speaking From Among the Bones by Alan Bradley is the fourth book in the Flavia de Luce series, and it was just divine! Flavia is an 11-year-old crime-solving prodigy with smarts, sarcasm and wit to spare. The community is opening the tomb of Saint Tancred in Bishop’s Lacey, where Flavia lives. The body of the missing organist is found instead when they begin to open the tomb. Flavia rushes to investigate! Hi-jinks ensue! Flavia makes a new friend, and discovers the mystery behind Saint Tancred’s tomb. There is a shocking revelation at the very end – readers of this series: you, above all else, must read this book!

The Gemma James/Duncan Kincaid series by Deborah Crombie is another new series for me. Necessary as Blood is the thirteenth book in the series. James and Kincaid are both police officers in London, and they also live together, raising two sons. As the book opens, a woman disappears. Three months later, her husband is found murdered, leaving their three-year-old child orphaned. Are the two crimes related? What will become of the child? And who is that little girl hiding in the window at Miles Alexander’s house? James and Kincaid are on the case as they discover the answers to all of these questions and more. Oh, and guess what? There’s a wedding, too!

David Baldacci has his hands full writing several different book series. Kind of like James Patterson, except not, because Baldacci actually writes his own books. Oops, did I say that out loud? One of Baldacci’s newer series features John Puller, a Criminal Investigation Division Officer in the U.S. Army. In the second and most recent book in this series, The Forgotten, Puller travels to Florida in response to a request for help from his elderly Aunt Betsy. Betsy says there’s something fishy going on in Paradise (seriously, that’s the name of her town). Puller arrives to find that Betsy took a little dip in her backyard fountain and drowned. Other elderly folk soon perish as well. Soon some children he had befriended disappear. And who is that giant man he saw at the hotel (Puller is pretty big and buff himself, you know)? He makes friends with a local cop, his friend Julie, a one-star general from Washington, joins them and they are on the case. You’ll never believe what’s going on – and who the bad guys really are.

These are four fun and easy reads for summer. Check ‘em out and hit the beach! Or you could do what I do, which is lock myself inside where it is heavily air-conditioned to an icy 67 degrees…