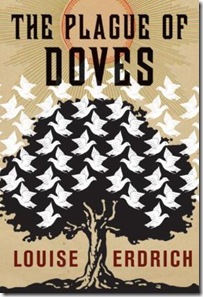 “Louise Erdrich’s mesmerizing new novel, her first in almost three years, centers on a compelling mystery. The unsolved murder of a farm family haunts the small, white, off-reservation town of Pluto, North Dakota. The vengeance exacted for this crime and the subsequent distortions of truth transform the lives of Ojibwe living on the nearby reservation and shape the passions of both communities for the next generation. The descendants of Ojibwe and white intermarry, their lives intertwine; only the youngest generation, of mixed blood, remains unaware of the role the past continues to play in their lives.

Evelina Harp is a witty, ambitious young girl, part Ojibwe, part white, who is prone to falling hopelessly in love. Mooshum, Evelina’s grandfather, is a seductive storyteller, a repository of family and tribal history with an all-too-intimate knowledge of the violent past. Nobody understands the weight of historical injustice better than Judge Antone Bazil Coutts, a thoughtful mixed blood who witnesses the lives of those who appear before him, and whose own love life reflects the entire history of the territory. In distinct and winning voices, Erdrich’s narrators unravel the stories of different generations and families in this corner of North Dakota. Bound by love, torn by history, the two communities’ collective stories finally come together in a wrenching truth revealed in the novel’s final pages.” – Goodreads

In 1911, five members of a family – parents, a teenage girl, and an 8- and a 4-year-old boy – were murdered. In the heat of things, a group of  men ran down a party of Indians and what occurred was a shameful piece of what was called at the time ‘rough justice’”

The Plague of Doves by Louise Erdrich consists of a myriad of interwoven tales focusing on six families: the Harp, Coutts, Peace, Wildstrand, Buckendorf, and Wolde clans. As can be expected in many of Erdrich’s novels, the cast includes white settlers, Ojibwe & Chippewa Indians, and their descendants. The novel highlights the first person narratives of an interconnected cast of characters who slowly reveal both the past and present of the fictional town of Pluto, North Dakota and the reservation that borders it. While some of the history shared predates 1911, at the heart of things is the tragic murder of a family that year, which triggered yet more tragic deaths, the results of which trickle down to affect the victims’ descendants yet today.

Nothing that happens here, nothing, is not connected by blood”

Erdrich masterfully weaves together layer after layer of the reservation’s and Pluto’s history, granting us insight into the lives of this wide range of characters. While Erdrich’s writing is absolutely lyrical, her intricate plotting means that you definitely have to pay attention or you may become confused by the switching back and forth of stories and people. And while there is tragedy and sorrow, there is also humor and comic relief (some darkly so) dispersed throughout – mostly connected to Seraph Milk or, as he is more commonly known, Mooshum.

One thought that continuously ran through my mind as I read this book was that this seemed to be a collection of short stories, however expertly woven together they were. Interestingly enough, I later learned that they originally were short stories that were later developed into this novel. I love it when I’m right! The Plague of Doves by Louise Erdrich definitely weighs heavy on the mind. While it moved veeery slowly, I liked the characters and the various stories within stories were interesting. Unfortunately, the fireworks just didn’t go off for me when I read this; maybe they will for you.

One thought on “Review: The Plague of Doves by Louise Erdrich”