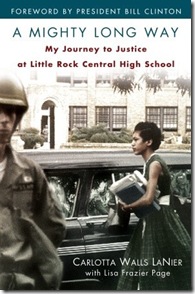 “When fourteen-year-old Carlotta Walls walked up the stairs of Little Rock Central High School on September 25, 1957, she and eight other black students only wanted to make it to class. But the journey of the “Little Rock Nine,” as they came to be known, would lead the nation on an even longer and much more turbulent path, one that would challenge prevailing attitudes, break down barriers, and forever change the landscape of America.
Descended from a line of proud black landowners and businessmen, Carlotta was raised to believe that education was the key to success. She embraced learning and excelled in her studies at the black schools she attended throughout the 1950s. With Brown v. Board of Education erasing the color divide in classrooms across the country, the teenager volunteered to be among the first black students–of whom she was the youngest–to integrate nearby Central High School, considered one of the nation’s best academic institutions.
But for Carlotta and her eight comrades, simply getting through the door was the first of many trials. Angry mobs of white students and their parents hurled taunts, insults, and threats. Arkansas’s governor used the National Guard to bar the black students from entering the school. Finally, President Dwight D. Eisenhower was forced to send in the 101st Airborne to establish order and escort the Nine into the building. That was just the start of a heartbreaking three-year journey for Carlotta, who would see her home bombed, a crime for which her own father was a suspect and for which a friend of Carlotta’s was ultimately jailed–albeit wrongly, in Carlotta’s eyes. But she persevered to the victorious end: her graduation from Central.
Breaking her silence at last and sharing her story for the first time, Carlotta Walls has written an inspiring, thoroughly engrossing memoir that is not only a testament to the power of one to make a difference but also of the sacrifices made by families and communities that found themselves a part of history.
Complete with compelling photographs of the time, A Mighty Long Way shines a light on this watershed moment in civil rights history and shows that determination, fortitude, and the ability to change the world are not exclusive to a few special people but are inherent within us all.” – Goodreads

When eighth-grader Carlotta Walls signed up to be one of the first African-American teenagers to attend the soon-to-be integrated Little Rock Central High School in Little Rock, Arkansas, she had no idea of the storm that was headed her way. In A Mighty Long Way: My Journey to Justice at Little Rock Central High School, Carlotta (now Carlotta Walls LaNier) breaks her fifty year silence to share her journey through her tumultuous high school years and her role as the youngest member of the history-making LIttle Rock Nine.

All I can tell you is that there is so much more to this story than we have ever been told by the media; so much more than I can ever outline for you in these few paragraphs. The infamous scenes of the Little Rock Nine facing National Guard soldiers as they blocked them from entering their new school, and the amazing pictures of the teenagers being escorted through the front doors of Little Rock Central High School by United States Soldiers are just the tip of the iceberg. There was so much more to follow for these nine courageous students.

Due to the threat of violence, throughout each day of their first year of school at Little Rock Central, each of the nine students was accompanied at all times by a member of the 101st Airborne Division of the United States Army – not that this deterred their white classmates from antagonizing them every chance they got. When their second year was to begin, schools were again shut down to prevent continued desegregation, and more battles were waged – in court and on the streets. The students and their families were persecuted individually as well. The Walls family, specifically, suffered loss of employment, hate calls, death threats, and even the bombing of their home – for which, at one point, Cartleyou Walls himself (Carlotta’s father) was arrested and beaten on suspicion of being responsible.

Despite the terrifying and tumultuous events during her high school years, there were happy times, as well. Walls/LaNier shares memories from her childhood as well as of the adventures made possible to the Little Rock Nine by their fame the summer after their first year at Little Rock Central High School. She writes of both the surprise and the pride she felt at being a part of such an important moment for African-Americans around the country. Walls/LaNier goes on to detail her life after graduation, college, and beyond, writing frankly about the lifelong effect these events from her adolescence have had on her life.

While beautiful, poetic prose this is not, Walls/LaNier does write clearly and directly with a strong voice. I was very moved by many of the unjust wrongs she experienced. It is still mind-blowing to me that this level of ignorance, hatred, and racism ever existed; I look upon it with such disbelief and sorrow. I am so lucky to have had parents, especially my father, who raised me with the knowledge that all are equal and equally deserving. Thanks, Poppie…

A Mighty Long Way: My Journey to Justice at LIttle Rock Central High School by Carlotta Walls LaNier is a book that you must read. Share it with your friends, your children, your grandchildren. Tales such as Carlotta Walls LaNier’s are essential to recognizing our history so that we may never go back. It is our job to make sure that happens. Never let these stories die.

One thought on “Review: A Mighty Long Way: My Journey to Justice at Little Rock Central High School”