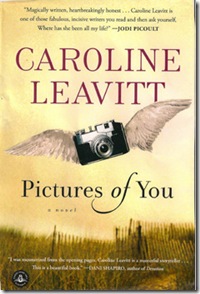 “Two women running away from their marriages collide on a foggy highway, killing one of them. The survivor is left to pick up the pieces, not only of her own life, but also must go back and deal with the devastated husband and fragile, asthmatic son the other woman left behind. Together, they try to solve the mystery of where April was running to, and why. By turns riveting and unsettling, Pictures of You looks at the choices women make-the roads they choose-to be loved.” – Goodreads

As Pictures of You by Caroline Leavitt (author of Girls In Trouble and Is This Tomorrow?) opens, Isabelle is driving through a thick fog – a true, rolling, gray fog outside but also a fog of strong emotion as she drives away from the philandering husband she has just left. Up ahead, April is stopped in the middle of the road, her car pointed in the wrong direction, her 9-year-old asthmatic son, Sam, with her. By the time Isabelle sees them, it is too late – there is no way to stop, and April is killed instantly. Isabelle is forced to return to where she had come from to recuperate, and Sam must return to his father, Charlie, to begin the herculean task of healing from their loss.

It turns out that Isabelle only lives six blocks away from Sam and Charlie. She begins to walk by their house and Sam’s school to steal glimpses of them to convince herself that they are healing. Sam sees her, and remembers her from the day of the accident, confusing her with the angel he had thought she was that devastatingly foggy day. He rushes to the library for books about angels, and becomes convinced that Isabelle is there to help him communicate with his deceased mother just one last time. He brings Charlie and Isabelle together by following her to her home one day, and their lives become evermore intertwined – for better or for worse.

Leavitt’s writing is direct and to-the-point, with vivid descriptions, eye-opening insights, and heart-wrenching emotion. Her skillful weaving of this tale draws the reader into the story, making you very much a part of it. She writes with such a light touch that it is not until the mystery of where April was headed on that foggy day is solved that you realize you had been sitting on the edge of your seat all along, waiting to find out.

Sam’s achingly loveable 9-year-old self is central to the story. A major theme here is asthma – or any childhood illness/disability. Much is focused on how Sam has been isolated because of his asthma; bullied, even. He spent much of his young life in the hospital in oxygen tents. Charlie and April’s marriage seemed to have been centered around taking care of Sam, as is often the case with a sick child. Charlie is so afraid of causing more harm to Sam, that he stays in a constant state of inaction and denial, which ultimately will cause only harm – however unintended. Leavitt apparently suffered from asthma as a child, and she does a masterful job of showing us how fully something like this can insinuate itself into every part of our lives if we are not careful.

Pictures of You by Caroline Leavitt is an engaging, irresistible novel. It is a story of loss, of redemption, of forgiveness, hope, and growth. It is at once heartwarming and heartbreaking. Trust me, friends – this is one that you want to seek out, and soon. You will thank me, I promise.

One thought on “Review: Pictures of You by Caroline Leavitt”