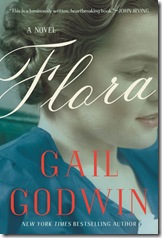 “Ten-year-old Helen and her summer guardian, Flora, are isolated together in Helen’s decaying family house while her father is doing secret war work in Oak Ridge during the final months of World War II.At three Helen lost her mother and the beloved grandmother who raised her has just died.A fiercely imaginative child, Helen is desperate to keep her house intact with all its ghosts and stories.Flora, her late mother’s twenty-two-year old first cousin, who cries at the drop of a hat, is ardently determined to do her best for Helen.Their relationship and its fallout, played against a backdrop of a lost America will haunt Helen for the rest of her life.
This darkly beautiful novel about a child and a caretaker in isolation evokes shades of The Turn of the Screw and also harks back to Godwin’s memorable novel of growing up, The Finishing School. With its house on top of a mountain and a child who may be a bomb that will one day go off, Flora tells a story of love, regret, and the things we can’t undo.It will stay with readers long after the last page is turned.” – Goodreads

In Flora by Gail Godwin, Helen is a long-in-the-tooth woman looking back at the summer she was ten years old and her aunt Flora came to stay with her. Helen’s grandmother, who had raised her after Helen’s mother died when she was very young, has just passed away. Her emotionally distant father has left town to work on a top-secret military project for the summer. Helen resents Flora for being there at all, but especially because Flora is a flighty, excitable, insecure, emotional twenty-two-year-old who claims to have had a special relationship with Helen’s mother long before Helen was ever born.

The story is set near the very end of World War II, during the height of the Polio epidemic and after a local polio scare, Helen’s father quarantines Helen and Flora in their big house at the top “of the mountain” (actually a large hill). The harder Flora tries to get to know Helen, the more Helen resists. They make friends with their grocery delivery-man, Finn, who provides some much needed distraction. Helen becomes smitten with Finn, and dreams of him coming to live with them. Finn’s affections, unfortunately, lay elsewhere. Tensions build between Helen and Flora, and by the end of the summer, everything comes to a cataclysmic end that no one ever expected.

I think Flora is supposed to be a sort of coming-of-age tale with plenty of self-discovery thrown in as Helen looks back on her childhood, her tenth summer in particular. Unfortunately, things fell just a little too short for me. I really didn’t feel there was any meat to the story. Helen and Flora spent the entire summer cooking and reading and playing school. There were no real connections made between anyone, although I think the reader is supposed to think there were. That said, Flora was an easy read. I wouldn’t waste too much time actively searching it out, however, if you’re looking for something to pass the time and this book happens to be laying in front of you, it wouldn’t be a terrible choice – just not a very meaningful one.