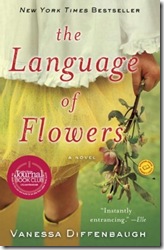 “The Victorian language of flowers was used to convey romantic expressions: honeysuckle for devotion, asters for patience, and red roses for love. But for Victoria Jones, it’s been more useful in communicating mistrust and solitude. After a childhood spent in the foster-care system, she is unable to get close to anybody, and her only connection to the world is through flowers and their meanings. Now eighteen and emancipated from the system with nowhere to go, Victoria realizes she has a gift for helping others through the flowers she chooses for them. But an unexpected encounter with a mysterious stranger has her questioning what’s been missing in her life. And when she’s forced to confront a painful secret from her past, she must decide whether it’s worth risking everything for a second chance at happiness.” – Goodreads

In The Language of Flowers by Vanessa Diffenbaugh, our heroine – Victoria Jones – is one hot mess. Victoria has been in and out of foster homes and group homes literally since she was born. She did live for about a year and a half with a woman (Elizabeth) who loved her and wanted to adopt her, but then there was much tragedy and drama and, well, that never happened. During their time together, though, Elizabeth did teach Vic the meanings of every flower under the sun; hence the name of the book, The Language of Flowers. Get it? Thought so.

As this story opens, Victoria has reached the age of eighteen and is being released from her final group home. She lives in a transitional home for a couple of months, then moves to the local park where she sleeps next to the illegal garden she has planted there. When she gets too hungry, she approaches a local floral shop owner for a job. Her new employer also helps her find a place to live. Soon Victoria’s experience with the Language of Flowers is impressing customers left and right. And then… we run into a stranger from the past! Who knows Elizabeth! He and Vic have a nice little wordless flower conversation over the course of a few weeks via (say it with me) the Language of Flowers, before finally speaking. His name is Grant, and he knew Elizabeth way back when. He and Victoria reconnect, and she slowly allows him to become her friend.

Victoria is very damaged (emotionally, that is) from the years of abuse, neglect and rejection in the foster care system. She doesn’t trust anyone, especially not herself. So a lot of the personal decisions she makes are based on this lack of trust, and this general apathy that she thinks she has toward others and life in general. It’s very frustrating to sit back while she makes the choices and decisions that she does; many of her problems are created by her own actions. Victoria is like that friend of yours whom you love dearly but is a total train wreck waiting to happen, and you can do nothing but watch. I sympathized with her, I did. I even liked her, at the same time that I wanted to strangle her…

Diffenbaugh definitely captures the fragile emotional state of someone who has lived the life that Victoria has, even capturing the all-to-common occurrence of history repeating itself once damaged child becomes damaged adult. She details Victoria’s struggle to reign in her fears – and all other emotions – to keep from both being hurt or hurting others, and her heartbreaking attempts to grow and break through those chains with stunning aplomb. I was particularly impressed to learn that this is Vanessa Diffenbaugh’s first novel. The Language of Flowers is absolutely a great read, but if you do not suffer fools gladly, then I suggest you stay away.

2 thoughts on “Review: The Language of Flowers by Vanessa Diffenbaugh”